Manchester United’s Premier League title challenge suffered a second setback in four days as they failed to breakdown an under-strength Arsenal in a 0-0 draw at the Emirates on Saturday.

United threw away top spot with a shock 2-1 defeat to bottom-of-the-table Sheffield United in midweek and are now three points adrift of league leaders Manchester City having played a game more than their local rivals.

A point edges eighth-placed Arsenal to within six points of the top four and it was the Gunners who came closest to scoring when Granit Xhaka’s free-kick struck the bar in the second half.

Unlike the early days of Ole Gunnar Solskjaer’s reign, it is against their traditional top six rivals that the Red Devils’ challenge for a first league title since 2013 has faltered.

United have still yet to beat any of City, Liverpool, Tottenham, Chelsea or Arsenal in the league in six attempts this season.

After winning at Old Trafford three months ago, the Gunners went seven league games without a victory but have bounced back in recent weeks.

Mikel Arteta’s men are now unbeaten in seven to move back into contention for a top-four finish, but will rue missing their chances in the second half to take all three points despite a number of key absences.

Two of Arsenal’s most impressive performers this season, Kieran Tierney and Bukayo Saka, were missing through injury, while captain Pierre-Emerick Aubameyang was also absent for the third consecutive game due to his mother suffering from an illness.

After a tentative start from both sides, Bernd Leno made a brilliant save to deny Fred a clever opener for United as the Brazilian tried to lob the ball in from the edge of the box.

Arsenal had a number of half-chances before the break without testing David de Gea as Thomas Partey and Nicolas Pepe shot just wide from the edge of the box and a teasing cross from Gabriel Martinelli just evaded Alexandre Lacazette.

It is exactly a year to the day since United signed Bruno Fernandes and the Portuguese nearly celebrated the anniversary with a curling effort that drifted inches wide.

Fernandes has had a transformative impact on United’s fortunes and came closer than anyone to breaking the deadlock before the break with a free-kick that was deflected inches over.

Willian has had the opposite effect since joining Arsenal in August, but the Brazilian was called upon by Arteta for the second half in place of Martinelli.

The former Chelsea winger’s lack of confidence was obvious as his weak effort was blocked behind when presented with a great chance two minutes into the second period.

Pepe then saw a goalbound shot blocked by Harry Maguire as Arsenal were the better side after the break.

Xhaka’s free-kick came even closer than Fernandes’s effort from a similar area on the field as the Swiss midfielder’s shot crashed back off the bar.

Another swerving effort from Pepe just did not have enough curl to nestle in the far corner, but United could still have snatched a win to keep the pressure on City late on.

Edinson Cavani was quiet for 88 minutes, but the Uruguayan pounced on Aaron Wan-Bissaka’s dangerous cross only to see his volley fly inches wide.

A point does at least maintain United’s long unbeaten run away from home in the league, which now stands at 18 games, bettering the previous club record held by Alex Ferguson’s 1998/99 treble-winning team. 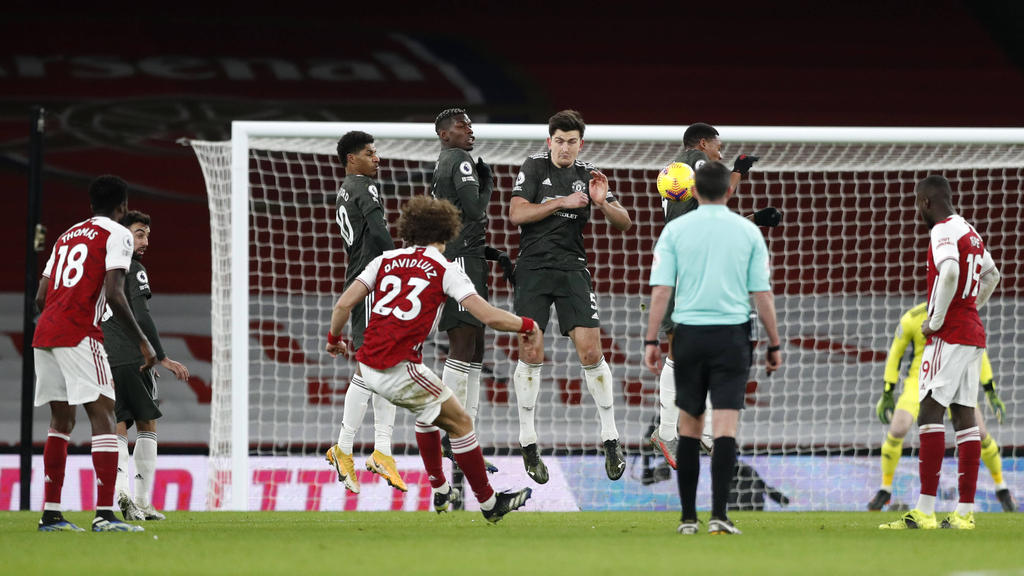