West Ham manager David Moyes said Tuesday he would not rush Andriy Yarmolenko back into action after the club gave the Ukraine international time off following the invasion of his country by Russia.

The 32-year-old winger was not part of the Hammers’ squad for Sunday’s 1-0 Premier League win over Wolves.

Moyes, whose side return to action on Wednesday with an FA Cup fifth-round tie at Southampton, said Yarmolenko had done some light training on Monday.

“We won’t rush him,” said the Hammers boss. “I’ve asked him to come in today and see how he feels. If he feels fine and up to it then he’ll travel with the team. If he doesn’t, then we’ll give him some more days off.

“Things can change very quickly but we’ll give him the chance to go with his own feelings.

“He’s really upset — he’s got lots of family members in Ukraine and friends and he’s worried for everybody and realises the difficulty that’s going on, and he’s a long way away and can’t do an awful lot about it.”

There was a strong show of support for Yarmolenko and Ukraine before West Ham’s match on Sunday — the players warmed up in T-shirts displaying his name and Declan Rice led the side out carrying Yarmolenko’s number seven shirt.

“We speak to him (Yarmolenko) most days,” said Moyes. “I have to say the players at the club were great with him (on Monday), they tried to get him back in, integrate him and make sure he felt really welcome and that we were thinking about him and his family.

“But there’s very little we can do — we just have to try to support him as best we can.”

Moyes, whose side face Sevilla in the Europa League’s last 16 next week, said he agreed with the suspension of Russian teams from FIFA and UEFA competitions.

“Football is such a powerful tool all around the world,” he said. “I think it’s really important we take action and make sure they (Russia) are isolated completely. I’m not a politician, but that’s how I feel about the football side.” 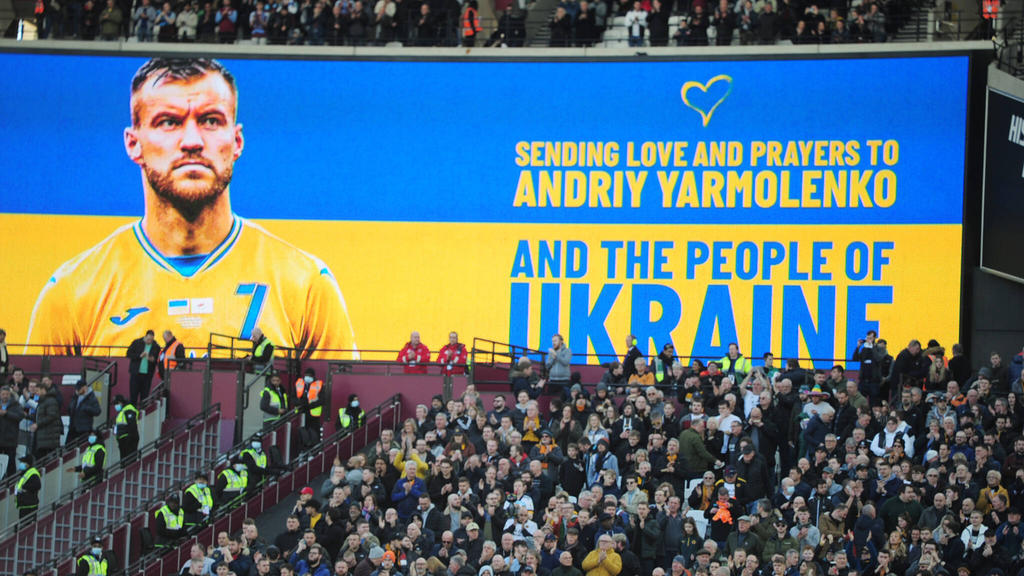 支付宝扫一扫打赏
×
4như
Nhãn mác:News Premier League Ukraine's Yarmolenko will 'not be rushed back'

‘Story of my life’: Klopp woe as Liverpool pipped in title race